Compassionate Estate Guidance
From Our Family to Yours
let's get started 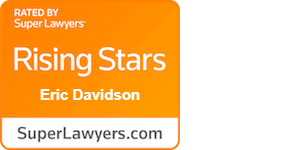 Eric began his legal career in 2009 as a paralegal for his father Steven. This experience taught Eric the intricacies of estate planning through drafting countless wills, trusts, powers of attorney, and other legal documents. As a naturally analytical problem solver with an acute attention to detail, Eric found that law, and specifically estate planning, was a perfect fit for his skill set.

Eric earned his JD at Golden Gate University (GGU) in San Francisco. GGU is the only law school in the Bay area with a department focused on estate planning law, thus Eric's time in law school was extremely focused and pertinent to his future practice. After law school, Eric joined his father as a lawyer at Davidson Estate Law, adding many additional years of legal service (and the third generation) to the Davidson law practice. Furthermore, in order to expand his legal knowledge and to be able better serve his clients, Eric is currently completing the LL.M in Estate Planning and Taxation program at GGU.

"No two families are exactly alike. That's why our process is absolutely collaborative and tailored to your unique needs."

A fifth-generation Californian, Eric E. Davidson grew up in Berkeley where he attended Berkeley High School and U.C. Berkeley. During high school, Eric excelled as a member of the Berkeley High rowing team, which lead to his selection to represent the US at the World Rowing Championships in Zagreb, Croatia. Eric was also a member of Berkeley's Boy Scout Troop 6, where he achieved the highest rank of Eagle Scout. At Cal, Eric earned his B.A. in Political Science and was a member of the rowing team.

After college, Eric became a licensed real estate agent and worked as a commercial/industrial agent in the East Bay Area for five years. This time as an agent developed Eric into a skilled client-focused counselor, where he excelled at understanding specific client needs and guiding clients through complex negotiations and transactions.

During this time, Eric also became an International Kiteboarding Association Certified Kiteboarding instructor and taught kiteboarding on the SF Bay. This experience contributed greatly to Eric's skills as a teacher and counselor.

When not in the office, Eric can be found enjoying the California outdoors. Eric is an avid kiteboarder, mountain biker, skier, snowboarder, fly fisherman, camper, and traveler. Furthermore, Eric has a passion for restoring and traveling in 4-wheel drive Volkswagen vans. For their honeymoon, Eric, his wife Natalie, and their boxer dog Oso, explored North America for one year in their 1986 Volkswagen Vanagon Syncro camper van. They even have an Instagram account! @lifeofadvanture.